Worship at the Foot of the Cross, Brian Gorman

Each Friday of Lent, we will be sending a brief meditation reflecting on themes of wilderness, prayer, and fasting. All the meditations are from Luke 4, the story of Jesus’s temptation in the wilderness.

Then the devil took him to Jerusalem, and placed him on the pinnacle of the temple, saying to him, ‘If you are the Son of God, throw yourself down from here, for it is written,

“He will command his angels concerning you,

“On their hands they will bear you up,

so that you will not dash your foot against a stone.” ’

Jesus answered him, ‘It is said, “Do not put the Lord your God to the test.” ’ When the devil had finished every test, he departed from him until an opportune time.

35And the people stood by, watching; but the leaders scoffed at him, saying, ‘He saved others; let him save himself if he is the Messiah of God, his chosen one!’ 36The soldiers also mocked him, coming up and offering him sour wine, 37and saying, ‘If you are the King of the Jews, save yourself!’ 38There was also an inscription over him, ‘This is the King of the Jews.’ 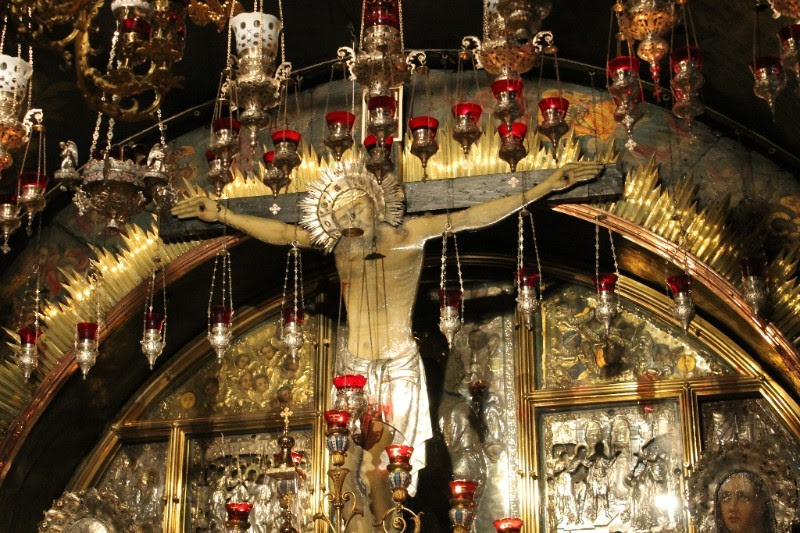 The cross at the Church of the Holy Sepulcher in Jerusalem, where tradition holds that Jesus was crucified.

When Luke describes Jesus’ temptation in the desert, he includes an important detail: the devil will return “at an opportune time” to tempt Jesus again. As has been mentioned in previous weeks, the first two temptations do arise again in Jesus’ life, albeit more subtly. The first temptation is mirrored in the miracles Jesus performs (impressive power to woo the people); the second temptation during his entry into Jerusalem (take the world by force instead of suffering).

If we read the third temptation alongside the story of Jesus’ crucifixion, it is hard to miss the parallelism. “Throw yourself from here” sounds a lot like “come down, save yourself.” Of course, thisis the moment that the devil tempts Jesus to prove himself. Jesus is alone, weak from physical torment, facing uncertainty about himself and his role. Sound familiar? Jesus is back in the desert!

(Ironically, the scoffers at the cross who want Jesus to prove his kingship by leaving the cross are correct that he is the King of the Jews and that he is about to prove it. But he proves his royal worth by staying on the cross.)

Jesus’ responses are parallel as well.  In the desert, he essentially says, “Trust God, even when it seems scary!” At the cross (skipping down to verse 46), he says the nearly same thing, “Father, into your hands I commend my spirit.” Luke is a masterful story teller. But it doesn’t even end there.

Right after Jesus says his final words and dies, the centurion standing by praises God and proclaims Jesus’ innocence. Why did the Israelites go out to the desert in the first place? To worship God. Jesus, like Moses, has freed his people that they may worship God. The desert has always been, first and foremost, about the worship of God.

We have come full circle during this Lenten season. We entered this time in search of deeper worship of God, knowing that in encountering temptation we are given the chance to declare God’s beauty, truth, and faithfulness. We followed Jesus through his temptation, saw how our lives face similar temptations. We followed Jesus into Jerusalem, and we even followed him to the foot of the cross. But it is here we must leave him, for in our sinfulness and unworthiness we have no option but to let him do for us what we cannot do for ourselves. His cross is different than ours. Today, on Good Friday, we must watch him suffer for us as a church, as a world, and as individuals. We must watch him utter his last breath, fully submissive to the will of God, trusting God to the end.

The only appropriate response is worship.