Lent, like Jesus’ ministry, is not a static season, but rather is funneling us towards the cross. Especially in the Synoptic gospels (Matthew, Mark, and Luke), the story intensifies as Jesus enters Jerusalem and confronts both the Roman and Jewish authorities.  Likewise, all of our fasting, prayer, and self-reflection is in preparation for Holy Week, the final days of Lent where we confront face to face our sin and Jesus’ suffering. Jesus’ temptation resurfaces in his last days as well.

Luke 19:28-39
28 After he had said this, he went on ahead, going up to Jerusalem.
29 When he had come near Bethphage and Bethany, at the place called the Mount of Olives, he sent two of the disciples, 30saying, ‘Go into the village ahead of you, and as you enter it you will find tied there a colt that has never been ridden. Untie it and bring it here. 31If anyone asks you, “Why are you untying it?” just say this: “The Lord needs it.” ’ 32So those who were sent departed and found it as he had told them. 33As they were untying the colt, its owners asked them, ‘Why are you untying the colt?’ 34They said, ‘The Lord needs it.’ 35Then they brought it to Jesus; and after throwing their cloaks on the colt, they set Jesus on it. 36As he rode along, people kept spreading their cloaks on the road. 37As he was now approaching the path down from the Mount of Olives, the whole multitude of the disciples began to praise God joyfully with a loud voice for all the deeds of power that they had seen, 38saying,
‘Blessed is the king
who comes in the name of the Lord!
Peace in heaven,
and glory in the highest heaven!’ 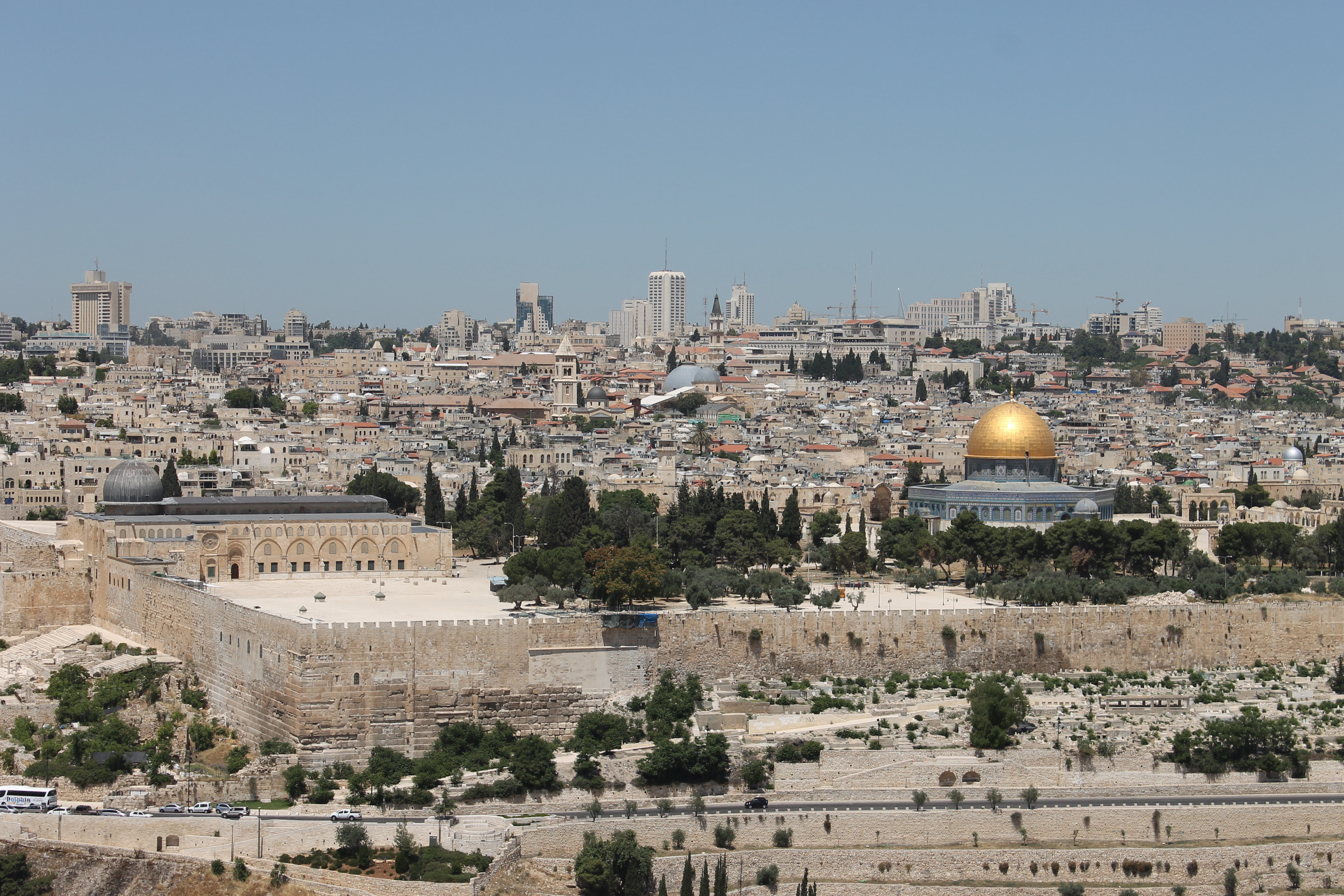 If you ever visit Jerusalem, it is a powerful experience to stand atop the Mount of Olives and look out at Jerusalem and to imagine this scene (and the one following, where Jesus weeps for a city that does not know what makes for peace, a lament which could be stated as powerfully today about Jerusalem). The Mount of Olives is quite steep and near its peak is the most important cemetery in Judaism. Figures from thousands of years of Jewish history are buried here because it is believed that the Messiah will appear at the Mount of Olives first and make his way to the Temple Mount (in the old city). His appearance will mark the beginning of the Resurrection of the Dead, and those who are buried there will be the first raised. So when Jesus appears on the Mount of Olives, entering Jerusalem and making his way to the temple, he is evoking all of the hope and dreams of Israel. Finally, a conquering king!

This is the second temptation all over again for Jesus. Just like the devil took him to a high place to look at all the kingdoms he could have, Jesus is again at a high place looking at a kingdom he could take by force. Knowing the implications of what he is about to do, he could use the crowd’s energy and incite a rebellion. The tempter is there again: will he seek power through violent means?

Yet this entry into Jerusalem flips the entire conquering narrative. Jesus enters on a colt, not a war horse. He proceeds to the temple where he disrupts the temple activities instead of endorsing them. And eventually he is even crowned, though with a crown of thorns. His actions, to use a musical metaphor, are to the tune of victory and conquering but in a different key. In other words, it’s not that Jesus has not come to conquer the evil of the world, or that he is not now king, but rather this is how God conquers in Jesus—through meekness, suffering, and his own death. The kingdom of God comes to earth not through violence done by God, but violence done to God. Jesus refuses to give in to temptation because he knows that God’s way achieves true peace and true justice.

Holy Week invites us to even more careful reflection. As we draw nearer to the cross, we must ask what kind of king do we hope for in Jesus? Do we truly believe that the way of suffering is the means by which the world is saved? Will we acknowledge not only his lordship but the manner in which he rules? Will we be subjects to a king in a kingdom whose quality is of another world?

Will we remember that Jesus’ crown is always a crown of thorns?

Let us fast and pray that we do not fall into temptation.